King County provides critical local and regional services to millions of people, with a two-year budget of $11.3 billion, 14,000 employees and nearly 60 lines of business.

The 2017-2018 Proposed Budget invests in Metro Transit, human services and other important services that reflect the values of King County residents. 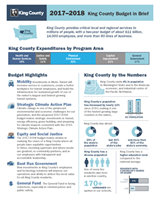 The King County General Fund will have significant reductions, especially in criminal justice and public safety.

The General Fund supports the traditional functions of a county government, most of which are required by state law.  About three-quarters of the General Fund is spent on criminal justice and public safety.

King County’s General Fund has faced chronic imbalances between revenue and expenditure growth for 15 years due to revenue limitations under state law.  State law puts an arbitrary 1 percent cap on the revenue increases counties can receive from property taxes, the largest source of revenue for the General Fund. Even as King County has increased efficiencies and reduced cost growth, these limitations mean that revenue can’t keep up with inflation and the increase in demand for services as the population grows.

Over the last few months, Executive Constantine worked with the Office of Performance, Strategy and Budget, departments and elected officials to balance the General Fund budget.  Through a mix of revenue changes, efficiencies, cost shifts to other funds and spending reductions, much of the two-year shortfall was filled. However, a budget gap of about $22 million remained. This was resolved by programs cuts and services reductions, including: 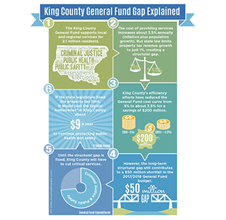 Watch: Dwight Dively, Director of Performance, Strategy and Budget, explains
how King County’s revenue falls behind even as property taxes go up.

1. Where are the major sources of revenue for the County?

King County’s revenue comes from a variety of sources. Property and sales tax make up about one-third of our revenue. The rest comes from charges for services, state and federal funding, and other sources, including fines, licenses and permits. 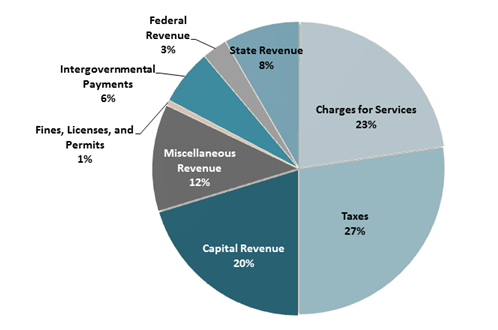 2. What does the County pay for with revenue it collects?

King County’s has a two-year budget of about $11.3 billion, which funds more than 60 lines of business. We provide a variety of important services, including transit, criminal justice and public safety, public health, human services, parks, solid waste, and wastewater treatment, among others. The following chart provides a breakdown of how our budget is allocated. 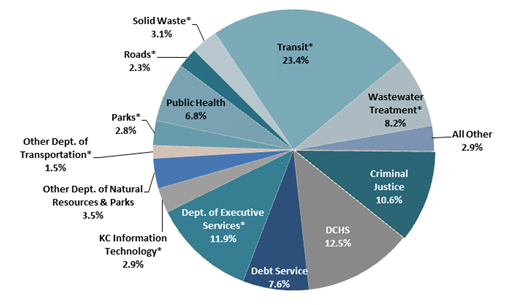 3. What is the General Fund?

The King County General Fund pays for the traditional functions of county government and other day-to-day services that do not have dedicated funding. It is the County’s most flexible revenue stream and makes up about 15 percent of the overall budget.

About three-quarters of the General Fund supports state-mandated criminal justice and public safety functions. The remainder pays for other programs, including elections, assessments, and health and human services. 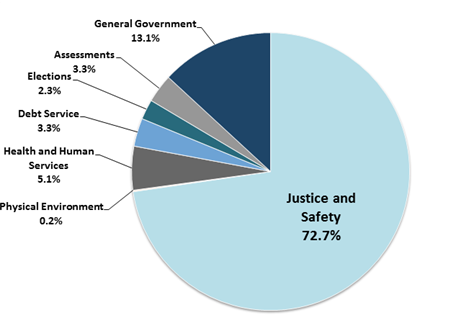 4. Where does the money in the General Fund come from? 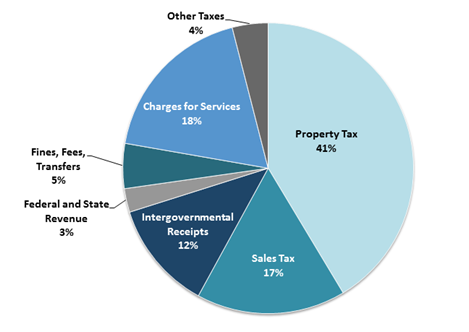 5. Why does King County have a budget problem when the local economy is doing so well?

Most of the County’s programs are financially healthy and will continue to meet the needs of our growing community. Our strong regional economy has boosted revenue for some of our funds, including Metro Transit. However, structural revenue limitations imposed by the State mean that the General Fund is under severe financial stress.

Unlike cities, which have a broad portfolio of taxes including business and utility taxes, the County relies heavily on property tax. State law puts a 1 percent limit (plus new construction) on the revenue increases counties can receive from property taxes, the largest source of General Fund revenue. As a result, revenues counties receive grow at a much slower rate than the cost of providing services. Even as the Executive has delivered on his promise to reduce cost growth during his administration, these limitations mean that revenue can’t keep up with inflation and the increase in demand for services as the population grows—about 3.5 percent annually.

6. How did you balance the General Fund?

Over the course of the spring and summer, Executive Constantine worked with the Office of Performance, Strategy and Budget, departments, and the elected officials heading separate agencies and branches to identify options to balance the General Fund budget.  Ultimately, the General Fund was balanced through a mix of revenue changes, efficiencies, shifts of costs to other funds, and spending reductions.

Program cuts and service reductions include:

7. Why are some county agencies growing while others have deficits?

King County has an $11.3 billion budget and provides a wide variety of services, from Transit to Human Services and Public Health. Many of our funds are financially healthy as a result of our strong regional economy and good financial management. Most of these are dedicated funds—contracts, fees and special levies that have been collected for specific purposes and must be used to pay for those services. For example, bus fares must go toward paying for transit and sewer fees toward paying for wastewater treatment. By law, the County cannot use dedicated funds to help balance budgets in other funds that may be facing deficits.

8. How is the budget developed?

The County is on a two-year, or biennial, budget cycle. The next biennial budget will run from Jan. 1, 2017 through Dec. 31, 2018. The Executive submitted his budget proposal to the King County Council on Monday, Sept. 26. The Council will review the budget in the fall, holding hearings and public meetings. The final budget will be adopted by the Council in mid-November and will take effect on Jan. 1, 2017.

9. How can I get involved in the budget process?

10. Why can't the County just be more efficient?

King County takes steps every day to become more efficient. Since 2010, the County has been working with unions and employees to reduce growth in costs and provide more value for every public dollar spent. Our efficiency efforts, known internally as Best Run Government, have reduced the General Fund cost curve from a historical rate of 5 percent to forecasted growth of about 3.5 percent. By 2020, these efforts will save more than $200 million.

11. Are all counties facing a similar General Fund budget problem or is this unique to King County?

Counties across Washington state are on the verge of a financial and service delivery crisis. Counties are required by law to provide essential services, including elections, assessments, law enforcement, prosecution, public defense, court systems, and jails, but the limits on General Fund revenue sources and growth rates mean revenue cannot keep up with costs.

12. Have you asked the state legislature to help?

Yes. Fixing the County’s broken revenue structure has been and continues to be our top legislative priority. Right now, we are working with our associations of counties, cities and public safety officials to replace the 1 percent growth limit with a limit that is tied to inflation and population growth.