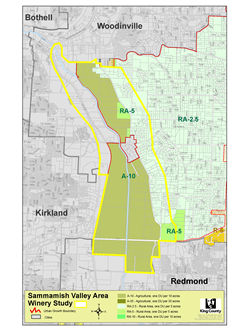 King County initiated a study in the Spring of 2016 to develop recommendations that will nurture the burgeoning wine and beverage industry in the Sammamish Valley area while improving the interface of the industry with the surrounding communities.  To achieve this goal, King County hired a private consultant, Community Attributes, Inc. and appointed a stakeholder committee of diverse interests.  The stakeholder committee met five times from April – August, 2016.  All stakeholder meetings were open to the public and a special public meeting was held in June, 2016 to solicit comments from all interested parties.  Additionally, the public could submit comments online and through the web-based comment portal designed specifically for this project.

The consultant, with guidance from the community stakeholder group and in consideration of all public input, completed their report.  Executive Constantine and his staff reviewed the report and developed a set of recommendations and action items to undertake.  The County Executive transmitted his proposal to the County Council on Thursday, April 26th, 2018 for consideration and adoption.

A major issue identified through the committee process and noted in the report is code enforcement.  At the beginning of the study, King County staff contacted all of the winery/brewery/distillery operations in the Woodinville area.  Each operator was informed about the commencement of the study.  If the operator had an active code violation, they were asked to sign a commitment that: 1) they would not make the violation worse or create an additional violation, and 2) they would abide by whatever code amendments were enacted by the King County Council as a result of the study.  The exception to this was that if there were any life safety violations, those would need to be addressed immediately.  Most operators signed the commitment.  Those that did not continued on the code enforcement path under current regulations.

A note on the Wine and Beverage industry in King County. King County is the largest county in Washington State with a population of 1.9 million people, which is 29% of the State’s population, and also makes it the 14th most populous county in the nation. The Woodinville Wine Country, which overlaps with portions of the study area, is home to more than 100 wineries and tasting rooms.  Nearly all of the Woodinville area wineries grow their grapes in Eastern Washington.  The wineries and tasting rooms are located in the Woodinville area to be closer and more accessible to their customers in Western Washington.  An estimated 795,000 people visit this area each year.  Recently, this issue has re-emerged as a priority for the community, the City of Woodinville, and King County due to a desire to foster the industry and address impacts on surrounding rural and agricultural areas.

The Sammamish Valley, located primarily in unincorporated King County adjacent to Redmond and Kirkland, contains portions of the City of Woodinville, the state’s major wine tourism destination, as well as one of the county’s designated Agricultural Production Districts (APD), which are intended to support the continuing presence of agriculture in the county. Agricultural uses in the Sammamish APD mostly involve sod farming and growing produce and flowers for commercial sale.

This agricultural activity adds to distinctive character in the area, particularly for visitors to the more than 100 wineries and tasting rooms in Woodinville. It attracts hundreds of thousands of wine tourists annually, partly due to its proximity to the greater Seattle area. Nearly all of the Woodinville area wineries grow their grapes in Eastern Washington.

The wine industry is a fast growing industry in Washington, supporting broad-based economic activity. Wineries support local economic development through both the production and sale of wine as well as through tourism, the latter drawing visitors from outside the region who spend on not just wine but also restaurants, hotels, and related expenditures.

Overview of Scope and Approach

King County will be evaluating policy and code recommendations for the unincorporated area that address the industry as it exists today and to the extent possible, anticipates its future evolution.  King County staff will provide technical assistance to the consultant regarding issues such as county policy, development regulations, permitting and enforcement processes, existing traffic studies, and any potential capital projects and plans.  The consultant will utilize existing information and studies from within King County and other wine supportive areas in Washington State and throughout the country.

The primary objectives of the study are to develop policy and code recommendations for King County in the areas of economic development, transportation (including circulation, parking, and access,) land use, and agriculture that support the following goals:

A critical component of the effort is incorporating stakeholder and public input. To do so we’ll be relying heavily on our stakeholder working group, public comments collected through the project website and a public meeting planned for June.