HIV drug resistance monitoring is funded by the Centers for Disease Control and Prevention (CDC) and has been conducted under HIV/AIDS surveillance authority at sentinel sites around the country, including King County, since 2003. The objectives of this work are to estimate the prevalence of different HIV-1 viral strains/types, monitor antiretroviral (ARV) resistance, and follow the outcomes of those with and without ARV resistance. Since this work began, the HIV viral genetic sequences used for this have also proven useful for identifying clusters of related virus that may reflect recent and rapid transmission and so present an opportunity for targeting HIV prevention resources where they may be most needed and fruitful. For more information about nation-wide cluster investigations, please see HIV Cluster and Outbreak Detection and Response, CDC.

The HIV viral sequences that are reported to the health department reflect the protease, reverse transcriptase, and integrase sections of the HIV genome and represent a fraction of the full HIV genome. We use the Stanford University drug resistance database website for interpretation of the sequences. The Stanford algorithm analyzes each sequence to identify mutations known to be associated with resistance to different ARVs and provides, for each ARV, a prediction of the degree to which the virus is likely to be susceptible to it, with values ranging between 1 (fully susceptible) and 5 (high level resistance). For our purposes, we have aggregated scores of 4 and 5 as high level resistance.

*In 2011, CDC stopped collecting remnant sera to conduct genotypes at no cost to patients from publicly funded testing sites.
** 2020 data may be incomplete. 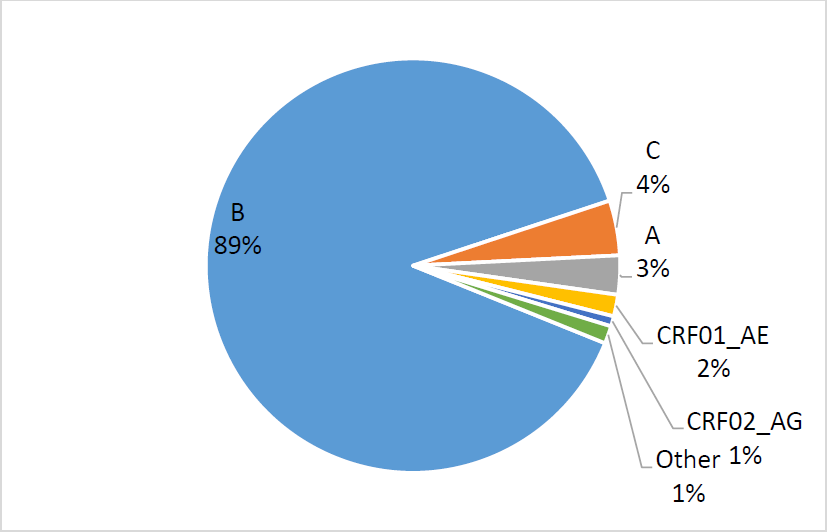 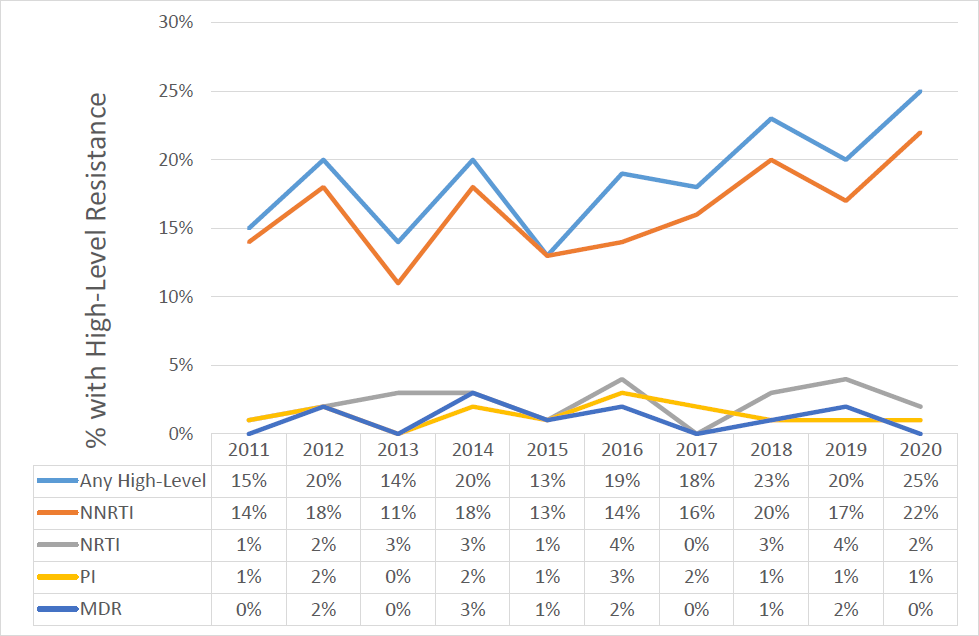 Prevalence of antiretroviral drug resistance (HIGH-level) among people living with HIV in King County in 2020 includes both primary and secondary (transmitted and acquired) resistance. 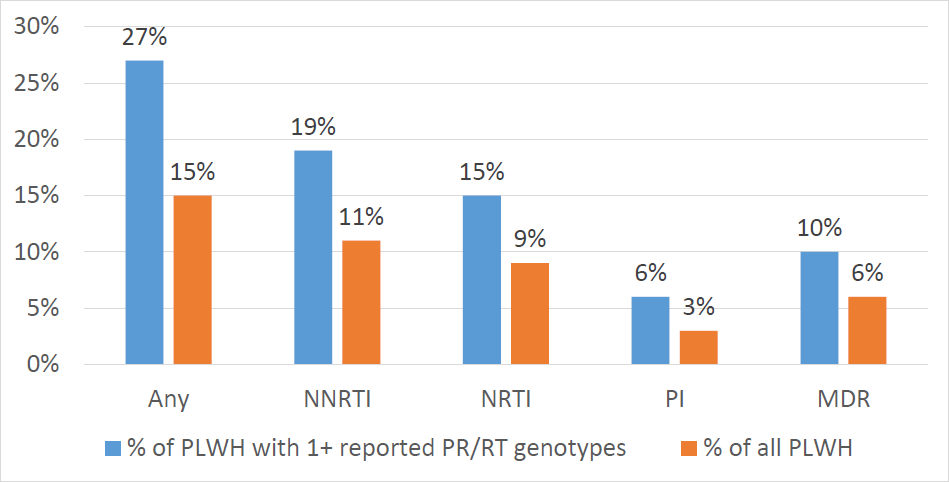 King County has investigated and intervened when we have identified clusters of public health concern, including working with viremic individuals with tenofovir and emtricitabine resistance (the components of pre-exposure prophylaxis, or PrEP). Those viremic people with PrEP resistance mutations may be more at risk of transmitting a PrEP resistant strain to sexual and drug-equipment sharing partners. Public health staff work with such individuals to help them overcome barriers so that they will become virally suppressed. Starting in 2021, we launched a project to offer similar services to members of rapidly growing clusters. Public health staff provide outreach services and care referrals to select people in clusters as an activity under the Ending the HIV Epidemic initiative. Selected participants are cluster members with a recent HIV diagnosis or who have care gaps or have substantial HIV viremia. Summaries of previous cluster investigations follow.

Public Health – Seattle & King County disease investigators first identified a cluster of three cases of HIV among persons living homeless in August 2018. At the time of an initial report (published in CDC's Morbidity and Mortality Weekly Report, or MMWR, November 2018), the cluster included 14 individuals diagnosed with HIV in 2018 living homeless in north Seattle. PHSKC identified two additional cluster cases diagnosed in 2018 (totaling 16), and five more cluster cases diagnosed in 2019. Analyses of drug resistance test sequences identified 9 people living with HIV (PLWH) diagnosed 2008-2017 who linked to cluster members diagnosed in 2018 and 2019, yielding a total cluster size of 30. Among the 21 women and nine men in the cluster, eight (27%) acknowledged exchanging sex for money (commercial sex workers or patrons). None were men who have sex with men.

Numerous public health and community response activities were undertaken due to his cluster. These included launching an incident command system, a rapid needs assessment of the affected population, communications with medical and social service providers using health advisories and health department blogs, a social marketing campaign, increased hospital and outreach testing in north Seattle and in the Seattle King County jail, enhanced linkage to HIV care and pre-exposure prophylaxis (PrEP), and providing new syringe services in north Seattle. No new PLWH diagnosed 8/2019-12/2020 linked to the cluster epidemiologically or molecularly.

April of 2016, we became aware of a potential primary transmission of PrEP (emtricitabine and tenofovir, or TDF/FTC) resistant HIV in an individual reporting high PrEP adherence. This prompted us to look at PrEP resistance among all King County residents living with HIV infection. Our goal was to find PrEP-resistant individuals with viremia -- plasma viral load above 500 copies (and thus with a higher capacity for onward transmission) and do harm reduction work to help them move towards viral suppression. We defined PrEP resistance as one or more genotypic test (at any time) with intermediate to high level resistance to both components of PrEP: emtricitabine and tenofovir. People living with HIV (PLWH) are referred to the relinkage team who attempt to contact PLWH either not receiving regular HIV-related medical care or without viral suppression to do harm reduction work and help move people towards greater antiretroviral adherence or to work on whatever barriers they have to access optimal HIV care. Sometimes PLWH are enrolled in the MAX clinic, which is a walk-in clinic for individuals with major impediments to seeking health care (including substance use, mental illness, incarceration, and homelessness). MAX uses participant incentives, including incentives to achieve viral suppression. More recently, our methods have shifted to focus on those with viral load above 1,000 copies and whose most recent genotype reflects resistance to PrEP.

Over the three years 11/2018-10/2020, 29 eligible PLWH were identified and relinkage efforts initiated. Outcomes included that (1) the PLWH now has a most recent viral load that was suppressed, or < 200 copies/mL (N = 12); (2) relocations out of King County (N = 8); (3) remaining substantially viremic (viral load > 1,000) as of their most recent viral load (N = 4); (4) intermediate level of viremia (N = 2 with viral loads > 200 but < 1,000); and (5) death (N = 3). Two of the PLWH who were eligible for intervention and are now virally suppressed are receiving medical care at MAX, and one of the PLWH who is substantially viremic was also referred to this clinic but has not yet engaged in medical care there. Multiple contact attempts have been made to the other viremic PLWH with TDF/FTC to encourage care engagement. Four of the 12 individuals whose most recent viral load was suppressed achieved viral suppression prior to or without public health intervention, and resources were provided to the other eight to help them engage or re-engage in medical care. Public health outreach workers also reach out to the medical providers of eligible PLWH to ensure that both the medical provider and their patients understand the importance of preventing ongoing transmission for these PLWH.

3. Large NNRTI resistant cluster –mostly among men who have had sex with men (MSM)

Starting in 2008, a large NNRTI-resistant cluster of HIV occurred in Washington State; a total of 152 individuals were diagnosed with similar strains of HIV through May 2021. NNRTI resistance was a common characteristic of the cluster -- genotype tests repeatedly demonstrated Y181C mutations. Of the 152 people, 82% were King County residents at the time of HIV diagnosis. A total of 90% were men acknowledging having sex with other men . These individuals overlapped with an epidemiologic investigation taking place wherein a single individual (index case) was named by multiple persons newly diagnosed with HIV as a potential source of their infections through partner services interviews. The epidemiologic investigation conducted in 2014 included twelve people (the index case and 11 others directly or indirectly linked to the index), three of whom were not linked by genetic sequence data. In 2015, we attempted to contact all King County cluster members who were virally unsupressed (N=9, with plasma viral load levels above 200 copies) to do harm reduction work in encouraging better use of antiretroviral therapy to gain viral suppression and thus reduce onward transmission. As of June, 2016 only six remain virally unsuppressed, including two who are no longer King County residents. In our new cluster detection and response work, between February 2021 and mid May 2021, 34 members of this cluster have been selected for outreach.

4. Multi-class-drug resistant cluster among methamphetamine-using men who have had sex with men (MSM)

In 2006 and 2007, strains of genetically similar MDR-HIV were identified in seven newly diagnosed ARV- naïve individuals and two treatment-experienced individuals. All nine were men who had sex with men (MSM) and all reported recent use of methamphetamine and sex with multiple, mostly anonymous sex partners. All had resistance tests showing resistance to most protease inhibitors, most non-nucleoside reverse transcriptase inhibitors, and varying levels of resistance to nucleoside reverse transcriptase inhibitors. A manuscript describing the epidemiology and phylogenic analysis of this cluster was published in 2008.

In February 2007, Public Health - Seattle & King County issued a press release regarding this cluster. The press release resulted in wide coverage in newspapers, radio, and TV. Via the news media, Public Health attempted not only to educate people about the cluster and drug-resistant HIV, but also to encourage HIV prevention. Later that same month Public Health conducted a survey of 325 sexually active men who have sex with men (MSM). Over half (57%) of the MSM surveyed had heard about the MDR cluster, with 90% of these men recalling key points. Almost all (98%) of the MSM interviewed agreed it was important to release information on this cluster to the media.