The last five miles of the Duwamish River towards Elliott Bay is one of the most polluted rivers in the country! In 2001, the US Environmental Protection Agency (EPA) declared it the Lower Duwamish Waterway Superfund Site. Superfund is the name of a federal law that requires the nation’s most toxic sites to be identified and cleaned up.

The EPA and Washington Department of Ecology (Ecology) are overseeing the cleanup of this site. Dozens of Potentially Responsible Parties (PRPs) will be required to pay for the cleanup.

The main agencies involved in protecting public health and cleaning up the site are:

Location of the Duwamish River

The Duwamish River connects from the Green River in Tukwila. The Duwamish River flows past the South Seattle neighborhoods of Georgetown and South Park, through Seattle’s industrial core, under the West Seattle Bridge and then empties into Elliott Bay. 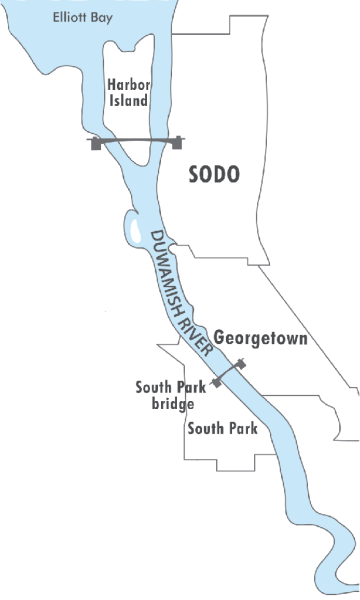 The toxic chemicals in the Duwamish River that are most dangerous to people’s health are polychlorinated biphenyls (PCBs), arsenic, carcinogenic polycyclic aromatic hydrocarbons (cPAHs), dioxins and furans.

These toxic chemicals build up in the mud of the river and get into the flatfish (perch, sole, flounder), crab, mussels and clams that spend their entire lives in the river. They are called "resident seafood". Regularly eating resident seafood from the river can increase your chance for health problems later on. Contact with the contaminated mud also poses a health risk.

The only Duwamish seafood safe to eat is salmon
because they spend a short time in the river. 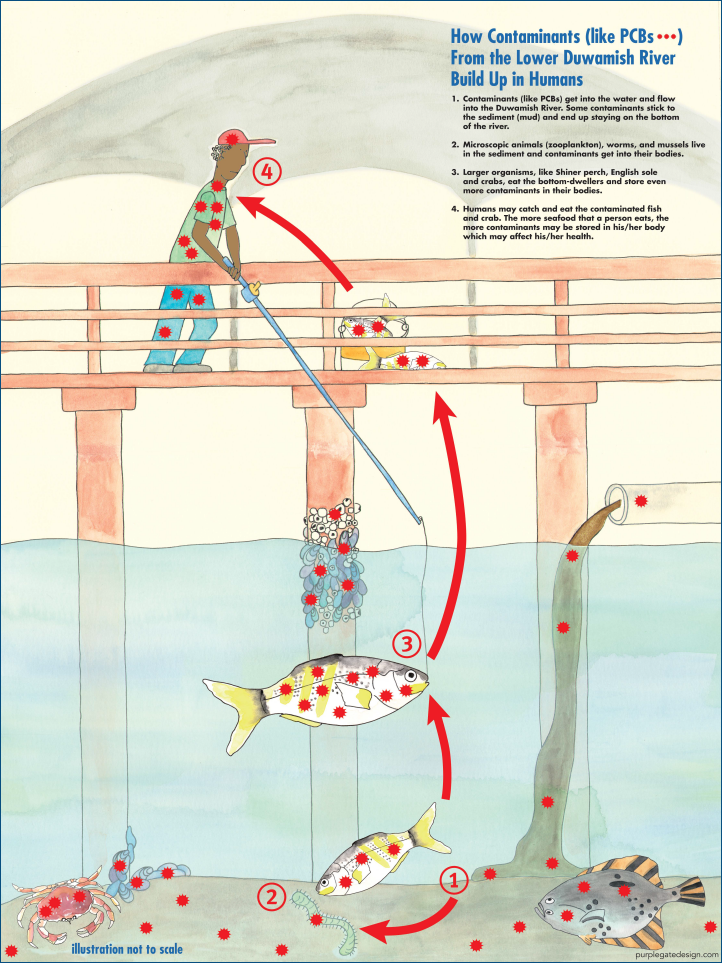 Cleaning up the chemical pollution from the river

The EPA leads the cleanup of the contaminated mud of the river bottom at the Lower Duwamish Waterway Superfund Site. Like other complex Superfund sites, the Duwamish River Superfund Site has multiple phases.

The Plan also calls for Monitored Natural Recovery (natural sedimentation) in some areas. 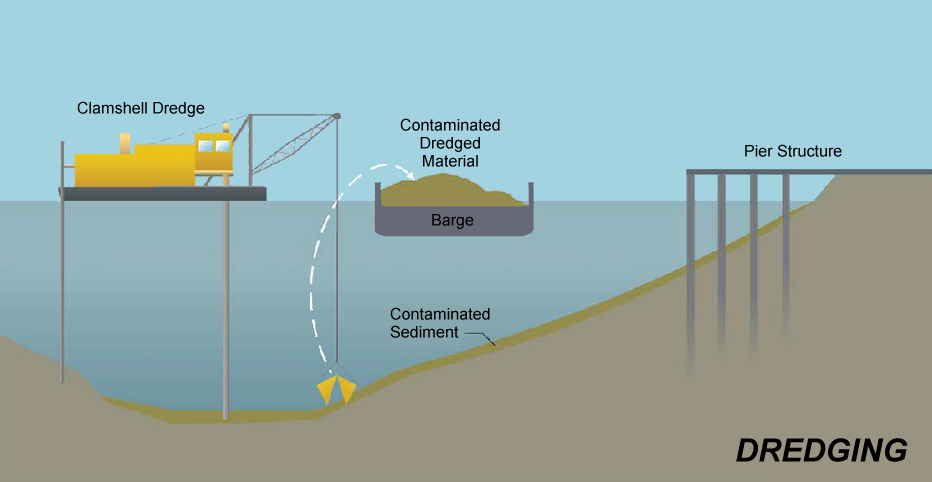 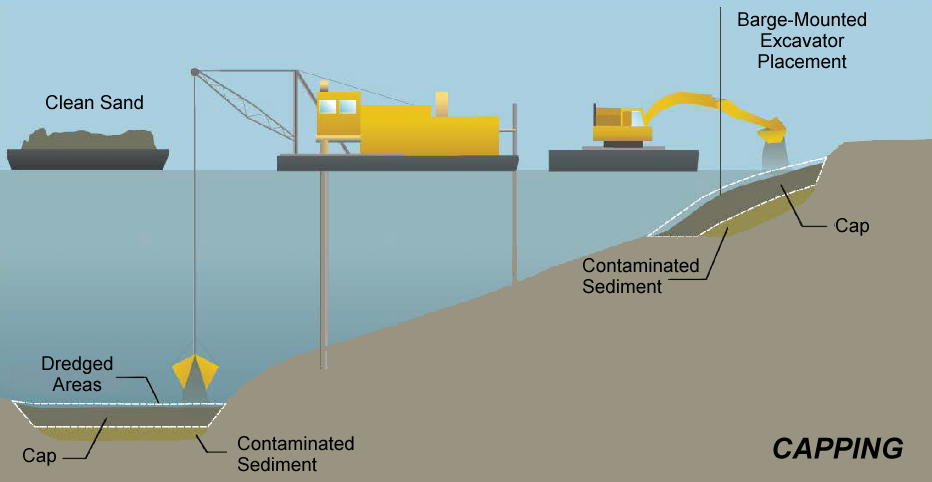 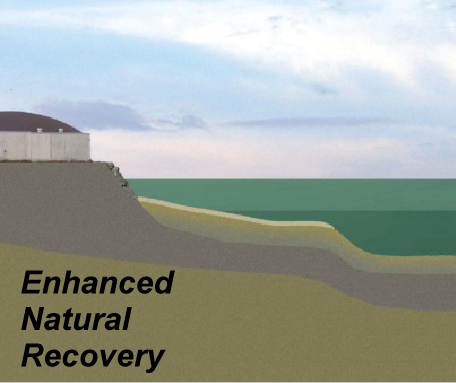 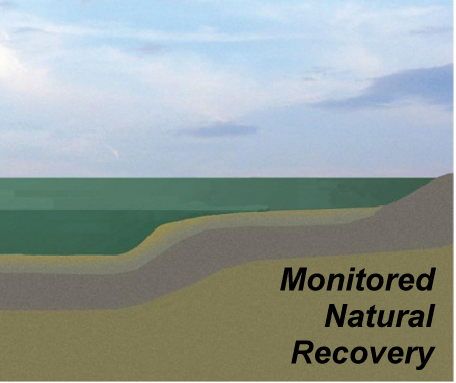 Over the coming years, the EPA will oversee the design and cleanup of the remaining contaminated mud. The EPA will monitor and maintain the site over time. As cleanup and source control continue, testing will be repeated to assess progress towards long-term cleanup goals.

The EPA provides various opportunities for communities to give input into the cleanup. The EPA takes into account Environmental Justice (EJ), meaning it will aim to ensure the fair treatment and meaningful involvement of all people regardless of race, color, national origin or income.

The EPA's Community Involvement Plan provides an overview on the engagement tools and techniques that the EPA will use throughout the cleanup of the LDW Superfund Site.

One of these opportunities for communities to get involved is with the Duwamish Roundtable. This group is made up of interested parties who will provide recommendations to EPA for the design and implementation of the cleanup.

Controlling chemical pollution from getting into the river

Ecology is leading efforts to control sources of chemical pollution from getting into the Duwamish River from the surrounding area. There are 20,000 acres of land that drains into the river. Toxic chemicals in the soil and groundwater from this surrounding area can find their way into the river through storm runoff and other routes. 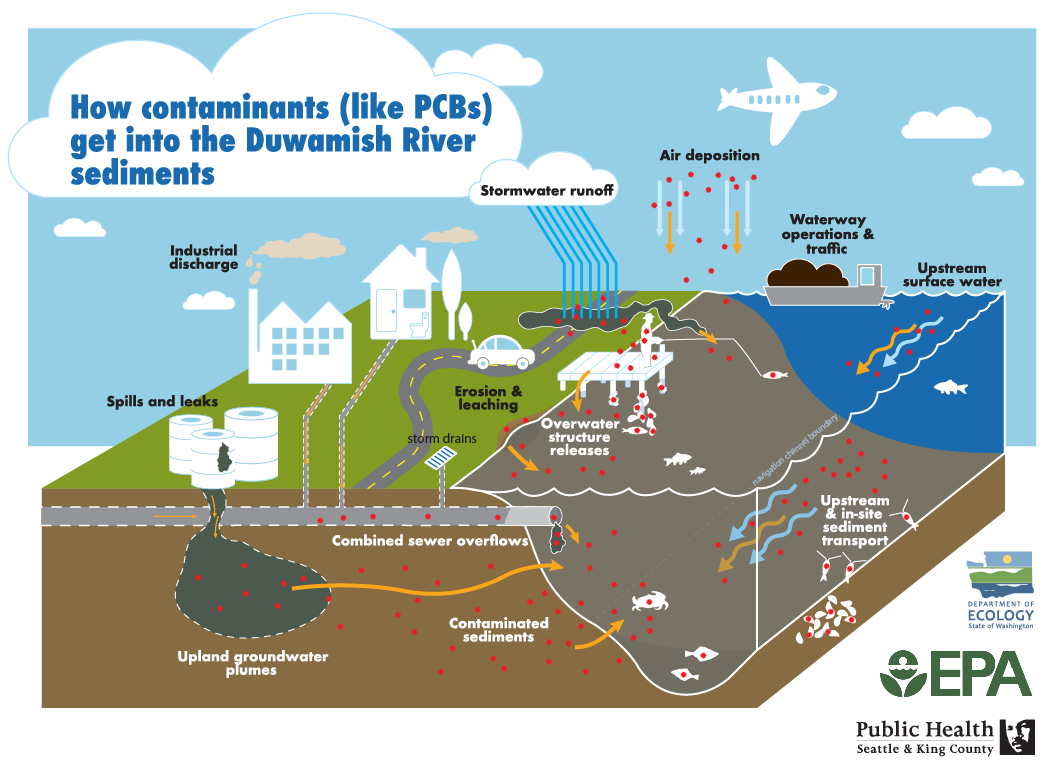 Source control means finding the sources and extent of chemical pollution, then taking actions to stop or reduce them before they reach the river. Source control actions include:

Thanks to source control, early cleanup actions, and natural sedimentation, the Duwamish is less polluted than it used to be. As Ecology further controls sources of pollution to the river, the risk that the sediments will become polluted again (recontaminated) will be low enough. EPA will move forward with phased cleanup of remaining areas of contaminated mud on the river bottom. In the long-term, EPA will monitor the natural recovery of the river and Ecology will continue to reduce pollution sources. These actions will help the river get as clean as possible and make seafood safer to eat.