Facts about lead and its human effects 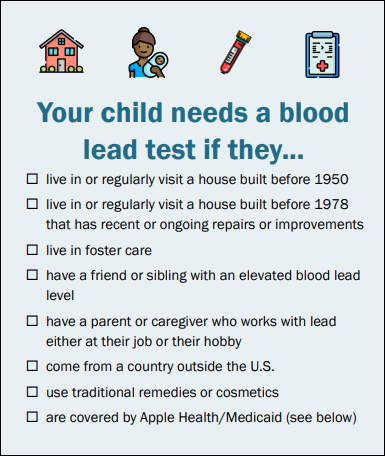 Find out if your child needs a blood lead test. Download and print a checklist:

Your child needs a blood test if they...

Lead is a useful and common metal that has been used by humans for thousands of years. It is also a very dangerous poison, particularly for children, when it is accidentally inhaled or ingested.

Rules and regulations prohibit lead in common products like most gasoline and paint, so lead poisoning has dramatically declined in the United States. However, it is still a real problem that continues to poison thousands of people in the U.S. each year. The following will provide information about sources of lead in the environment, who is most at risk for lead poisoning, how you can reduce the chances that you or your children will become injured by lead, and what Public Health - Seattle & King County is doing about the lead problem.

1. There is no safe level of lead

Though lead is found frequently in our environment, it has no known purpose in our bodies. When lead gets inside the body, the body confuses it with calcium and other essential nutrients. This confusion can cause permanent damage to the health of both children and adults.

In children, lead is most damaging when they are six years and younger. Children are growing at a very fast rate - growing bones, developing stronger muscles and creating many connections in their brain. When lead instead of essential nutrients is "available" to the body to make bones, muscle, and brain connections, permanent harm to health can occur. Even at low levels, lead can be harmful and be associated with:

High levels of lead are life threatening and can cause seizures, unconsciousness, and death.

Learn more about arsenic and lead in children.

Lead exposure is a concern for adults, even though they have finished growing. Since an adult's body is much larger than a child's body, more lead is needed to cause injury but the harm lead can do to an adult is very serious. High levels of lead can cause:

2. Who is most at-risk to illness from lead exposure

Children are most at risk for lead injuries because their bodies are still developing and because they tend to put things that may have lead dust on it in their mouths. Here's more:

There are many sources of lead in our environment. Here are a few of the most common:

The most common source is lead paint. Lead carbonate [PbCO3/Pb(OH)2)] was added to paint to speed drying, improve durability, and protect the surface from corrosion. Even though the negative health impacts of leaded paint were known as far back as the early 1900s, lead in residential paint was not banned until 1978. If a building was built before 1978 and has older paint, it should be assumed to have lead paint.

Children are at particular risk from lead paint because they occasionally eat paint chips (sometimes on purpose). Lead paint can have a sweet taste, and babies and toddlers will often lick or suck windowsills, crib bars, and other objects that may be coated with lead paint. Leaded dust from peeling, chipping, cracking or otherwise deteriorating lead paint will collect onto floors and other surfaces. Children touch the dust, and then put their fingers in their mouths.

Lead paint will only harm you or your family if it is peeling, flaking, or otherwise coming off of the surface.

Leaded dust from paint can be a big problem during remodeling, when lead dust can become a hazard for the whole family, but particularly children. There are many tips for safe remodeling, which guide the use of sanders, scrapers, heat guns, keeping children and pets out of work areas, and how to clean up afterwards. Visit the Environmental Protection Agency (EPA) for more information.

Lead has been found in candy and candy wrappers imported primarily from Mexico and Asia. Learn how the United States Food and Drug Administration (FDA) is trying to control lead in imported candies.

Some art supplies, such as artists' paint, still have lead in them. Buy only non-toxic paints for your children. Some hobbies require the use of lead, such as stained glass, firing guns, making ammunition, and making fishing lures and sinkers. Keep children away from areas where lead is being used. Be sure not to bring lead dust on your clothing into the home.

Some jewelry is made of lead and can pose a danger to children if they put the jewelry in their mouths. Lead is not absorbed through the skin. Teach children to keep jewelry out of their mouths, or do not allow children to have lead jewelry. Learn more from the CDC.

Adults who work in industries that use lead (battery manufacturing, pipe fitting, firing ranges, demolition, glass production, smelting operations, etc.) should be careful not to bring lead home with them. Shower and change clothes and shoes at work. Do not contaminate your car.

Imported glazed pottery and leaded crystal may also be sources of lead. Minimize the use of these products.

Drinking water may have lead in it, though permitted levels in municipal sources are carefully regulated. The largest source of lead in drinking water occurs through leaching from lead-containing pipes, faucets, and solder, which can be found in plumbing of older buildings. If you have older pipes in your home, be sure to run the water for 60 seconds every morning before using it. Do not use hot tap water for drinking purposes. Learn more about lead in drinking water.

Vinyl mini-blinds imported from China, Indonesia, Taiwan and Mexico before 1997 contained lead, which was used to make them less brittle. Lead dust forms on the blinds, particularly when the blinds are exposed to sun and heat. According to the U.S. Consumer Product Safety Commission, different blinds contained different amounts of lead. While the blinds are no longer imported into the United States, older blinds containing lead may still be in use or available for purchase in thrift shops.

There is evidence that some soft vinyl lunch boxes may contain lead in the lining. The Center for Environmental Health claims that there is a real risk to children. However, the Consumer Products Safety Commission does not believe the amounts of lead present pose a serious risk to children.

4. Who should be tested for lead poisoning

In addition, healthcare providers should assess all children for risk of lead poisoning at 12 and 24 months of age. Federal law currently mandates blood lead screening for all children covered by Medicaid. For more information, please see the Washington State Department of Health recommendations for lead testing in children.

5. What you can do to reduce your risk

There are many steps you can take right now to reduce you and your family's risk of exposure from lead.

The only way to know if your child is lead-poisoned is by getting him or her a blood lead test. If your child has Medicaid insurance, testing for blood lead levels is required, especially for children at 12 months and 24 months of age. Children with Medicaid insurance between the ages of 36 months and 72 months of age must receive a lead screening blood test if they have not been previously tested.

To do the test your physician will need to obtain some of your child's blood. The blood can be drawn in two ways - 1) from a vein in the arm or 2) a prick on the finger or heel. If blood is drawn from a prick on the finger or heel and the results are high, your child should be re-tested using the blood collected from the arm to confirm the results. Blood collected from the vein provides the surest results.

If your child has a high blood lead level, some follow up may be necessary. For example, you may be eligible for a visit from Public Health experts who can investigate potential sources of lead in your home that may be contributing to your child's lead level.

Check your house for lead hazards

Conduct routine check of your house looking for lead hazards. One way to do so is by contacting a professional. A professional can check your home in one of two ways, or both:

Reduce the dust levels in your home

Wash your hand before every meal and snack.
Keep children from eating and chewing on non-food items such as paint chips, window sills, and dirt.
Avoid using imported glazed pottery for food.
Eat foods high in calcium, Vitamin C and iron. Good nutrition helps prevent the body from absorbing lead.
If you enjoy candies imported from Mexico, check the list of candies that have been shown to contain lead, and avoid those candies.

Have qualified professionals do remodeling work such as re-painting. There are standards that professionals must meet to ensure work with leaded paint is done safely, reliably, and effectively.

If you know you have leaded soil or leaded paint take interim steps while you are figuring out a long-term solution. For example, temporarily reduce lead paint hazards by repairing damaged painted surfaces. To minimize exposure to contaminated soil, plant grass or use bark to cover soil. These actions are not permanent solutions and will need ongoing attention.

If your child has received a blood lead test and the results exceed the Centers for Disease Control & Prevention "reference level" (5 micrograms per deciliter) your family is eligible to have a free visit from a Public Health - Seattle & King County staff member to look for potential sources of lead present in your home that may be contributing to your child's lead level.

For almost 100 years, ASARCO operated a copper smelter in Ruston, Washington. Arsenic and lead pollutants from the smelter settled on the surface soil covering over 1,000 square miles of the Puget Sound basin. The extent of contamination is called the Tacoma Smelter Plume and includes parts of King, Pierce and Thurston counties. Left undisturbed, arsenic and lead remain in the soil and continue to be a health risk – especially for young children.