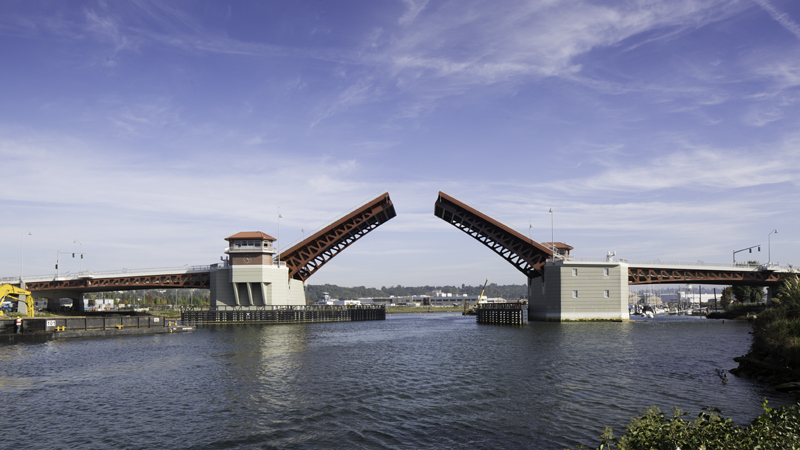 The Code of Federal Regulations is the current legislation guiding the South Park Bridge vessel opening schedule, which currently states that the bridge is prohibited from opening for vessel traffic between 6:30 a.m. – 8:30 a.m. and 3:30 p.m. – 5:30 p.m., Monday through Friday, except on Federal holidays. The Seattle Department of Transportation operates the South Park Bridge under contract for King County and can be reached at 206-549-2896.

About the new bridge

The new South Park Bridge on 14th Avenue S/16th Avenue S opened to traffic at 6 a.m. Monday, June 30, 2014. With two piers capped by brick-surfaced control towers and a sweeping bascule design, the new bridge recreates the look of its predecessor and returns a familiar silhouette to the lowrise South Park skyline. The King County Department of Transportation managed the project.

The new bridge spans the Duwamish waterway, a short distance from where the old South Park Bridge once stood. The structure is a bascule, or drawbridge, with two moveable leaves forming the main span so the bridge can be opened for marine traffic below.

The main bridge piers in the river are concrete, supported by sunken concrete caisson foundations. Both approach spans are made of precast concrete I-beam girders that support the bridge deck. The bridge has four driving lanes, two bike lanes and two sidewalks.

The rain garden area packs a lot of features into a small strip of right-of-way. The pocket park is located on the footprint of the former South Park Bridge and provides much-needed access for the community to reach the river. It naturally filters runoff from the south half of the bridge and surrounding streets, lessening demand on Seattle's stormwater collection system. It also preserves local history by featuring many salvaged parts from the old bridge and offers a view of some of the art elements incorporated into the project under the 1% for Art program. Finally, interpretive signs in the area offer information on the area's history, archeology, bridges, and other topics of interest.

The old South Park Bridge was open from 1931 to 2010 and was an iconic feature of this historic community. The bridge was closed to all traffic on June 30, 2010, due to severe deterioration and earthquake vulnerability. The community and county leaders turned out in huge numbers for the last crossing of the bridge and continued efforts to identify and seek funding for a replacement bridge.

The community of South Park was tireless in its efforts to make sure the bridge and the connections it provides were not forgotten. County Executive Dow Constantine was ultimately successful in building a coalition of agencies to fund construction of a new bridge. U.S. Senator Patty Murray and U.S. Representative Jim McDermott were also instrumental in the effort, supporting the county's application to the U.S. Department of Transportation for a federal stimulus grant.

Time lapse video of the project