Beavers and beaver ponds affect biodiversity by increasing habitat for numerous bird, amphibian, mammal, and fish species, including coho and steelhead salmon. Compared to ponds without beavers, beaver wetlands create habitat for a significantly larger array of biodiversity. Beavers are known as ecosystem engineers because they create, significantly modify, and maintain habitat and ecosystems, and they consequently have a large impact on the biodiversity of an area. As ecosystem engineers, beavers build dams, which create wetlands that may in turn flood and kill trees and create snags, all of which attracts insects and fish and wildlife. They also build lodges, which provide homes for other animals such as muskrats, mink, and even river otters. The bases of lodges provide refugia for small fish, and some birds nest on top of lodges. Another way beavers are ecosystem engineers is by cutting trees, shrubs, and herbaceous plants and thereby altering the vegetation composition of their territories, which will affect the other species that live and feed in the area.

Beavers are also a keystone species, which is a species that has a disproportionately large influence on the species around it relative to its abundance. One beaver or beaver family creates habitat for a multitude of other species, and these insects, birds, fish, amphibians, reptiles, and mammals rely on this habitat for their survival. In this way beavers contribute to biodiversity to a degree that cannot be overstated. Beaver ponds are biodiversity hotspots, so conserving them means conserving biodiversity.

A recent study showed water temperatures downstream of beaver ponds were 2.5 degree C lower than upstream! That's 4.5 degrees F. The changes occurred because of how the ponds recharge groundwater, which resurfaces colder downstream. As air and water temperatures rise from climate change and other human impacts and fish and other wildlife experience thermal stress, these downstream cooling effects could make a difference if enough beaver ponds exist in the region.

Beaver ponds store carbon. And while it is true that beaver wetland do release methane gas, this is part of a natural wetland process.

Probably the greatest way that beavers help humans adapt to climate change is by storing water and improving hydrologic conditions. They increase water storage on the surface as ponds are created and increased in size. This water filters down into the water table and recharges groundwater too. In some places this increase in water storage helps keep streams dry that might otherwise go dry in the summer.

As our climate changes in the northwest, we will have more rain and less snow. Large, sudden high-flow events will be more common in streams. Beaver dams add "roughness" to the channel and help slow down the water as it moves through a system. Slower water means less erosion and in some cases less flooding from storms. Ponds also absorb some of the water even if they already appear full, so the volume of water also decreases through a beaver system.

Finally, beaver dams impound water in areas that would otherwise not be saturated. In this way, beaver wetlands become natural fire breaks. And as wild fires are more likely to occur on both sides of the Cascades, fire control becomes increasingly important.

Additional information on how beavers can help us adapt to climate change, see the poster and associated handout below.

Beaver ponds filter out and store nutrients and pollutants. Beaver ponds also store sediment. If left in place long enough, the sediment will eventually turn the pond into a marshy meadow -- a beaver meadow. Beavers use the mud on the bottom of their ponds to build and restore their dams and lodges. For this reason, they don't tend to build dams in the rocky areas that fish like to spawn in. 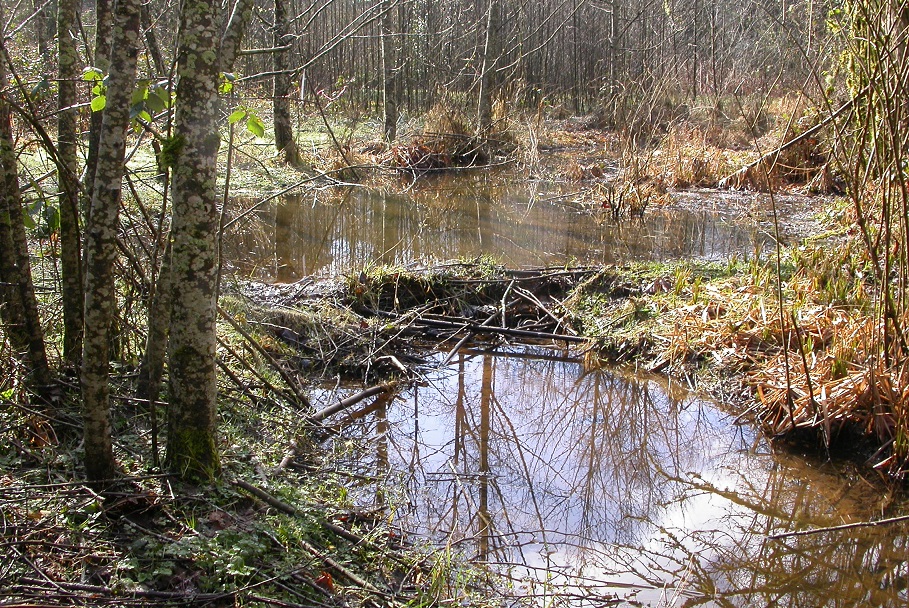