What Are Benthic Macroinvertebrates?

What kinds of organisms are they?

Aquatic Insects. Most benthic macroinvertebrates that we collect are insects in early stages of development. They spend most of their lives underwater as larvae. When aquatic insects reach adulthood, most types take to the air—they grow wings and no longer live in the stream. However, they usually live nearby so that when the time comes to deposit their eggs, they can do so in the same water. Caddisflies, stoneflies, and mayflies are excellent examples of aquatic insects with this type of life cycle. 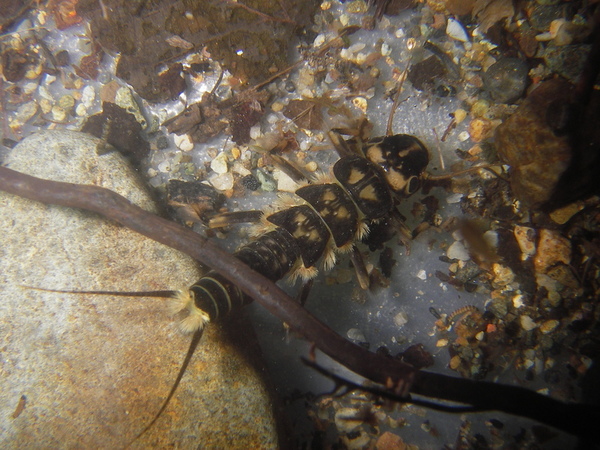 Why are they good indicators of stream health?

Because many benthic macroinvertebrates live a year or more and don't move very far as larvae, they experience a range of seasonal conditions in the streams where they live. If conditions are consistently good, sensitive taxa are more likely to survive in the stream than if conditions have been highly variable or especially bad for even a brief period over their lifetime.

Pollution Tolerance. Some benthic macroinvertebrates are tolerant of pollution (such as aquatic worms), whereas others are intolerant. The presence or absence of tolerant and intolerant benthic macroinvertebrates helps scientists understand the condition of the stream. For example, many types of mayflies are very sensitive to pollution, so their absence in a stream can signal a problem.

Water and Habitat Quality. Benthic macroinvertebrates experience a variety of other stressors in addition to pollution. For example, the amount of fine sediment on the stream bottom, how "flashy" a stream is during storm events, and elevated water temperature can all impact the stream community. Some benthic macroinvertebrates can tolerate some of these stressors better than others. Knowing which types of organisms are living in the stream can help scientists understand the condition of the stream.

Where do they live? 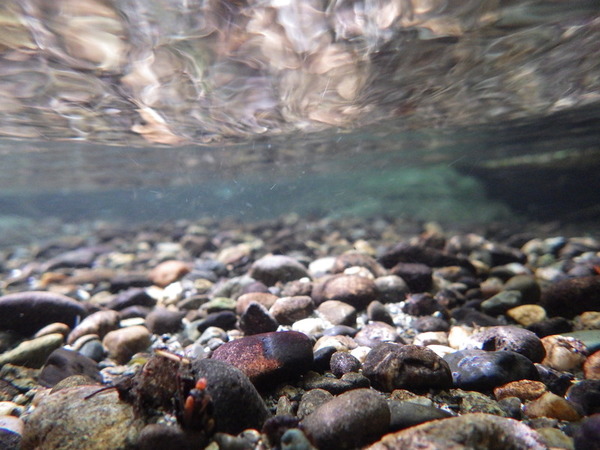 Stream Bottom Habitats. Benthic macroinvertebrates have many different lifestyles, and a diverse community requires diverse conditions throughout a stream habitat. Streams are composed of different habitat types such as riffles, runs, glides, and pools. Different benthic macroinvertebrates are adapted to the different microhabitats each of these provide. Some taxa need the clear, cold, fast water found in headwater streams. For example, benthic macroinvertebrates such as mayfly larvae can cling tightly to rocks. They live in riffles where the water is fast and turbulent. Other taxa are more commonly found in the deep, slow, warmer reaches. Aquatic worms are often found in the bottom of pools where fine sediments accumulate, and dissolved oxygen levels are lower.

Why are they important?

Benthic macroinvertebrates are not only good indicators for biologists who are studying stream health, but they also actively play a very important role in the stream ecosystem. They are an important link in the food chain as prey items for fish, birds and other predators. They are also critical to nutrient cycling in streams, breaking down leaves and other materials into small sizes that other organisms can use.

What do they eat?

Scrapers obtain food by scraping algae such as diatoms off rocks and other hard substrates in the stream channel. Scrapers are most commonly found in parts of streams where sunlight can reach the bottom to allow algal growth such as riffles where water is shallow and fast. Many scrapers have evolved mechanisms that allow them to stay attached to rocks in fast currents. Scrapers may include snails, certain mayfly larvae, and limpets.

Shredders feed on leaves, twigs, and other pieces of organic matter that fall into a stream. They need lots of trees overhead (a dense canopy cover) to supply these materials. Shredders chew up the debris into smaller particles, which can then be eaten by Collectors. Shredders include stonefly larvae and scuds. The caddisfly larvae pictured above is another example of a shredder.

Collectors eat fine organic matter such as leaf fragments, bacteria, stream bed deposits, and waste products from other organisms. There are two categories of collectors: filtering and gathering. Filtering collectors feed by filtering food out of passing water with hair-like fans or by spinning a fine net. Gathering collectors feed by gathering food from the bottom. Collectors may be found in all types of stream reaches but are typically most common in lower reaches because that is where fine sediments generally accumulate. Collectors include worms, blackfly larvae, and many mayfly and caddisfly larvae and midges.

Predators eat other macroinvertebrates and even fish. Predators can be found anywhere in the stream ecosystem but are less numerous compared to other feeder types. There must be enough prey to support predators or they will not be present at all. Predatory organisms include the larvae of dragonflies, damselflies, dobsonflies, adult beetles and some beetle larvae, some fly larvae, some stoneflies, some caddisflies and even one group of mayflies.