King County (and former Metro) recognized early on that toxics found in wastewater were finding ways into local waterbodies.

Historical discharges of wastewater that were untreated or poorly treated had caused a buildup of toxics in some areas of waterbodies as well. As these toxics have been reduced in wastewater through source control measures and a reduction in CSO discharges, their continued presence in the waterways was an issue needing to be addressed. With the passing of the Comprehensive Environmental Response, Compensation and Liability Act (CERCLA) in the 1980s, known as Superfund, the US EPA began to clean up highly polluted upland areas. In the late 1980s voters in the state of Washington passed the Model Toxics Control Act (MTCA) providing a similar program ran at the state level. As part of MTCA, sediment management standards were set to guide cleanup of contaminated sediments. 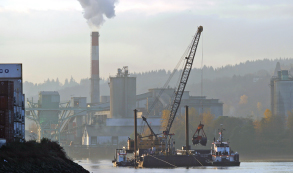 1983-1989 – Three embayments in Puget Sound with sediment contamination were designated by the U.S. Environmental Protection Agency (EPA) as federal Superfund sites: Commencement Bay, Eagle Harbor and Harbor Island in Seattle . The first sediment cleanup action in Commencement Bay was the Simpson project and was completed in 1989. Cleanup is still continuing at other sites. Eagle Harbor and Harbor Island are in the process of being cleaned up.

1984 – Metro (now King County) completed a five year study (Toxicant Pretreatment Planning Study) of toxic pollutants in its wastewater system and the regional aquatic environment. This study concluded that a toxicant problem existed in the urban bay areas of Elliott Bay and the Duwamish Waterway due to significantly elevated levels of metal and organic priority pollutants in sediments. This work set the stage for subsequent planning activities in Elliott Bay and the Duwamish Waterway by recommending that U.S. EPA and Ecology develop an action plan to address the toxicant problem with sediments in urban bays.

1985 – The Puget Sound Water Quality Authority was established by the Washington State Legislature to develop and oversee the implementation of a comprehensive management plan for Puget Sound.

1986 – Initial Puget Sound Water Quality Management Plan was adopted by the Puget Sound Water Quality Authority. The plan included the goal of reducing and eliminating adverse environmental effects of contaminated sediments. The plan also required Ecology to develop statewide sediment quality standards and to develop and maintain an inventory of contaminated sediments in Puget Sound that do not meet the sediment quality standards.

1988-1989 – The Puget Sound Dredged Disposal Analysis (PSDDA) was designed to develop environmentally safe and publicly acceptable options for the unconfined, open-water disposal of dredged materials. Open-water disposal sites for clean dredged material were established by rule. The U.S. Army Corp of Engineers (COE) is the lead agency managing the sediment evaluation and approval process for dredgers wishing to use the sites.

1991 – The state Department of Ecology adopted sediment management standards for designating marine sediments that have adverse effects on aquatic animals and requiring cleanup of those sediments. Washington is one of the first states to have such standards.

1991-1992 – Metro facilitated interagency meetings and funded a report which prioritized the risks due to contaminated sediments in Elliott Bay and the Duwamish Waterway. The report identified the Pier 53-55 area as a high priority for site cleanup.

1991 – King County and the City of Seattle reached an agreement with the National Oceanic and Atmospheric Administration (NOAA) Damage Assessment and Restoration Program to fund sediment cleanup projects, habitat restoration and source control in Elliott Bay and the Duwamish Waterway. King County, NOAA and the City of Seattle formed a program with other natural resource trustees called the Elliott Bay Duwamish Restoration Program. Other members include the U.S. Fish and Wildlife Service, Muckleshoot Indian Tribe, Suquamish Tribe, and Ecology.

1993 – A three foot cap was placed on sediments near Pier 53-55 in Elliot Bay. Sediments were contaminated by an historical sewer outfall in that area.

1995 – King County (formerly Metro) began implementing the CSO Sediment Baseline Monitoring Plan, developed as a condition of its NPDES permits, that provides for the monitoring of marine sediments in the vicinity of wastewater treatment plant outfalls and CSOs.

1996 – Based on existing information, Ecology identified 49 sites in Puget Sound that did not meet sediment management standards. Of the 49 sites, 19 are in Elliott Bay/Duwamish Waterway. Seven of the 19 sites are near King County combined sewer overflows (CSOs):

1999 – King County developed a plan to address the seven sites near King County CSOs. The Sediment Management Plan laid out a schedule to voluntarily remediate the sites.

In 2001, the EPA placed the Lower Duwamish Waterway on its Superfund list. That launched a formal process that will lead to cleanup of more contaminated sediments throughout the Duwamish Waterway. Under the Superfund process, EPA and Ecology are overseeing a remedial investigation/feasibility study that the LDWG partners are conducting.

2004 – The Duwamish/Diagonal Sediment Remediation Project partially removed and isolated with an engineered cap contaminated sediment near four outfall pipes on the Duwamish Waterway in Seattle.

2005 – King County placed a thin sand layer over four acres adjacent to the Duwamish combined sewer overflow and Diagonal storm drain cleanup site to control residuals from the dredging and to compare enhanced natural recovery to monitored natural recovery in that portion of the LDW.

2006 – The City of Seattle and King County completed the design and got approval for the Slip 4 cleanup action that included habitat restoration. Source control work in the basin identified ongoing sources that need to be controlled before cleanup can begin.

2010 – The Remedial Investigation for the Lower Duwamish Superfund site was approved by EPA. It identified the nature and extent of contamination and the risks they pose to human health and the environment.

2012 – The Feasibility Study evaluating cleanup alternatives for the Lower Duwamish Superfund site was approved by EPA.

2014 – The EPA released its Record of Decision (ROD) , which will direct cleanup actions and offer plans for source control and long-term monitoring in the Lower Duwamish Waterway.

2014 – The Remedial Investigation for the East Waterway Superfund site was approved by EPA, which identified the nature and extent of contamination and the risks they pose to human health and the environment.

2015 – King County and the LDWG partners started a pilot study in the Lower Duwamish Waterway to determine if activated carbon, a common purifier in household water filters, traps contaminants in waterway sediments. The study is designed to see if polychlorinated biphenyls (PCBs) and other pollutants can be prevented from entering the food chain. The pollutants are trapped by activated carbon that is mixed in a thin layer of clean material (either sand or gravely sand) and placed over existing contaminated sediments. This method, if successful, could be used in the final cleanup.

2015 – King County and the LDWG partners started several pre-design studies.  Working with the EPA, these studies include collecting sediment, fish and shellfish tissue, and surface water data as a baseline for future monitoring of the waterway-wide cleanup; and collecting information on structures and waterway activities that may affect the cleanup design.

2018 – King County and the LDWG partners started the design for the cleanup of the upper third of the Lower Duwamish Waterway.

2018 – King County completed an update to the Sediment Management Plan which now identifies the sediment management strategy for every King County CSO.