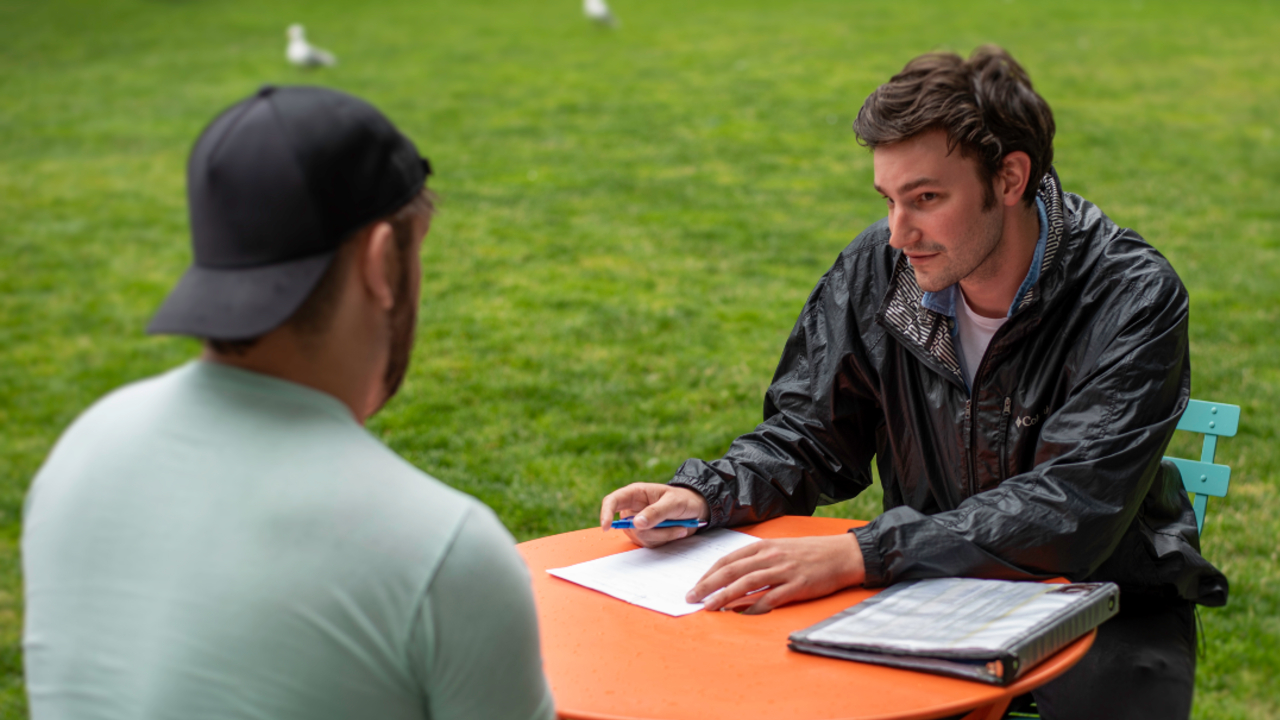 Some programs also help those who have been hospitalized or incarcerated to transition back into the community to develop fulfilling lives. Individuals with behavioral health issues who are also experiencing homelessness may wind up in jail because of these very issues.

Our programs are intended to help connect them to social services instead of cycling through jail and hospitals—a costly approach that doesn’t support people, sustain change and promote productive lives.

In addition to the King County Diversion and Reentry Services, there are two state-funded programs serving people who are releasing from a Washington State Prison to services in the community.

In addition to the King County Diversion and Reentry Services, there are two state funded programs serving individuals who are releasing from a Washington State Prison to services in the community.

Both programs are managed by Sound Health, and any questions regarding program services, eligibility, or referrals should be directed to Paul Gilbert at 206-302-2664, or Paul.Gilbert@Sound.Health.

The two King County programs are:

Each program involves legislatively defined eligibility criteria and a formal review and selection process. Both programs are designed to serve adults with severe and persistent mental illness.

Personnel within the WA State Department of Corrections (DOC) identify eligible individuals who are incarcerated (ORCSP and FIRST) or under DOC supervision (FIRST only) and refer them to the Statewide Review Committee (for ORCSP) or the local community review team (for FIRST). Once reviewed and approved by either committee, Sound behavioral staff engage the assigned participants in pre-release services and ongoing, post-release treatment and case management services in the community upon release from custody.

Diversion and Reentry Services endeavors to develop and administer programs and initiatives in King County that are supportive of, and informed by, individuals with behavioral health conditions encountering the criminal justice and crisis systems.

We will respond to the needs of the whole person, support individuals remaining in the community through access to services and resources, promote recovery, and reduce episodes of incarceration and hospitalization.

The vision of the Diversion and Reentry Services section is to empower community members to transform and create the meaning and the realization of justice to achieve equity and self-determination for those impacted by the collateral consequences of criminal justice and crisis systems involvement.

National Framework for Diversion and Reentry

King County implemented a range of jail reentry programs and services in 2003 and 2004 to help people in the criminal justice system with unmet mental health or substance abuse needs connect to treatment services, stable housing, and other supports as alternatives to incarceration. Initially, this effort, called the King County Criminal Justice Initiatives (CJI), was born out of the Adult Justice Operational Master Plan and was focused primarily on serving individuals coming into the adult specialty courts in King County, with some limited discharge planning services in the King County Jail.

These services were expanded in 2005 when State of Washington funds via  House Bill 1290, called "Jail Transition Services", were appropriated to Counties to serve a jail reentry function. The CJI was expanded to serve all municipal jails in King County as well as expand reentry services in the King County Jail. In 2007, programs were further expanded via the King County Veterans and Human Services Levy (VHSL), which included funding for a Forensic Assertive Community Treatment (FACT) intensive services program.

The King County FACT program was terminated in 2015 and replaced with a new model implemented under the Familiar Faces Initiative focused on serving individuals who cycle through our jails. When the Veterans and Human Services Levy was renewed in 2012, the Veterans Justice Initiative (VJI) was created to oversee programs serving Veterans who are involved in the local criminal justice system, to work with the Federal Veterans Justice Initiatives and to work closely with our local Veterans Courts.

Our Team and Commitment to Equity

Equity and social justice is a crucial component and guiding principle of the administration, service delivery and systems coordination/transformation framework of the Diversion and Reentry Services section. We are working on using equity tools in all of our processes, including Request for Proposals and new program development, current contracting, systems integration, systems coordination and workforce development.

The Department of Community and Human Services (DCHS) is committed to a data-driven and outcomes-oriented approach to program planning and policy development to best support individuals with behavioral health conditions who encounter the criminal justice system.

Impact of DCHS-Supported Programs on Jail Use

Additional evaluation reports will be posted here as they become available.

The national focus on diverting individuals from entering into our jails, as well as supporting those who do through successful reentry, is robust.  The Data Driven Justice Initiative, implemented under the Obama Administration, has a  diversion-focused playbook resource tool available.

The  National Stepping Up Initiative offers evidence-based approaches to jail reentry and is focused on a national movement to reduce the number of individuals with behavioral health conditions in our local jails. King County is a member of both the Data Driven Justice and the National Stepping Up communities of counties across the United States.

The  Vera Institute has resources and information about ending mass incarceration and  reducing the use of jails, the focus of our local Diversion and Reentry programs for  behavioral health populations who make up a large portion of jail populations locally and nationally.