The new facilities include:

Beginning in the summer of 2000, the County began searching for and analyzing sites. In May, 2001 the King County Council selected six sites and eight marine outfall sites for further evaluated as “systems” (including a plant site, conveyance system and outfall).

In June 2001, the county began a second round of evaluation. Based on this, the County Council selected two systems–including conveyance options and four marine outfall zones–to continue on into the environmental review process.

King County conducted a formal environmental review of the Brightwater project under the State Environmental Policy Act (SEPA). On November 19, 2003, a Final Environmental Impact Statement (Final EIS) was issued for this project.

On December 1, 2003, the King County Executive made a decision on the location for the Brightwater treatment system  .

On July 27, 2005 the King County Executive reaffirmed his earlier selection of the Route 9 - 195th St system alternative for the Brightwater project. To learn more, download the Regional Wastewater Services Plan: summary of the Executive's process to update the Brightwater system siting decision, July 2005  .

Marine outfall (off of Point Wells) 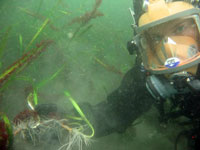 Marine restoration (at the marine outfall)

The purpose of an EIS is to inform decision makers and the public about the probable significant adverse environmental impacts and potential mitigation measures for the proposed project.

What is included in the Final EIS

Additional chapters 4-17 (in Volumes 2 and 3) sets forth this analysis in greater detail. Following Chapter 17, you will find a glossary, distribution list, and the summary of the Brightwater Summer 2003 technical seminars. Five addenda to the Final EIS have also been issued.

The remaining volumes include appendices that provide background and technical information for corresponding chapters in the Final EIS (in Volumes 4-10), Draft EIS comments and responses (in Volumes 11-15) and comments from the Summer 2003 technical seminars (Volume 16).

Appendices for chapter 3, description and comparison of alternatives

Appendices for chapter 10, noise and vibration

Appendices for chapter 11, land and shoreline use

Appendices for chapter 13, light and glare

This addendum reports on the results of seismic trenching on the Brightwater Treatment Plant site in the summer of 2006 and the approach to seismic design on the site. The report and memo referenced in the addendum are available here.

Provides additional information on and/or evaluation of the impacts of constructing and operating:

A 16-page summary (2 MG) of the final supplemental EIS is also available.

Table of contents, list of tables and figures (37KB)

Chapter 5 – Environmental impacts if a major earthquake were to damage Brightwater facilities and mitigation of impacts (1.0MB)

Note: though not issued as part of the draft supplemental EIS, an appendix G has been added – see above under: "Changes in the supplemental EIS text made in response to comments"

Note: this memo has been updated and the updated version, above, was posted on this web site on Jan. 8, 2007. Changes have been made on the following pages:

In addition, a footer has been added to the updated document. Otherwise, the remainder of the document is unchanged.

Appendix A - Trenching investigations of the proposed buildings (3.4 MB)