Firearms in the hands of domestic violence offenders are a deadly combination - not just for survivors and their families, but also for law enforcement, the community and offenders themselves.

Research shows that when a firearm is present in a domestic violence situation, it increases the risk of homicide for women by 500 percent. A woman's risk of homicide is highest when she is trying to end the relationship. According to the highly-respected Ontario Domestic Assault Risk Assessment (ODARA), the single most important red flag to predict a lethal response was “recent separation.”

45% of DV homicides occur within 90 days of separation, most within the first few days. The best available research shows that the most important element in preventing fatalities is to remove the firearm from the situation. Additionally, domestic violence calls lead to more police fatalities than any other type of law enforcement response.

Because risk of death is heightened in these cases, immediate action is critical. The Unit is responsible for quickly and proactively assisting with the service of protection orders, immediate removal of firearms based on those orders, and holding those accountable who fail to comply with or who otherwise possess firearms unlawfully. Our goal is swift and certain enforcement of current firearms laws, with the larger objective of community education and better implementation of laws. Officially launched on January 1, 2018 with funding from King County and the City of Seattle, the Unit is designed to be multidisciplinary and interjurisdictional in nature to respond to the reality that firearms cross jurisdictional lines and span both civil and criminal cases.

With a focus on harm reduction and prevention, the mission of the Regional Domestic Violence Firearms Enforcement Unit is to reduce gun violence and increase victim and community safety through regional collaboration and proactive enforcement of firearms laws. This new regional Unit is the culmination of a multi-year system review, dedicated to developing effective strategies for Washington State’s Protection Order firearm relinquishment law (RCW 9.41) and Extreme Risk Protection Order law (RCW 7.94). Harm reduction is the foundation of our work. 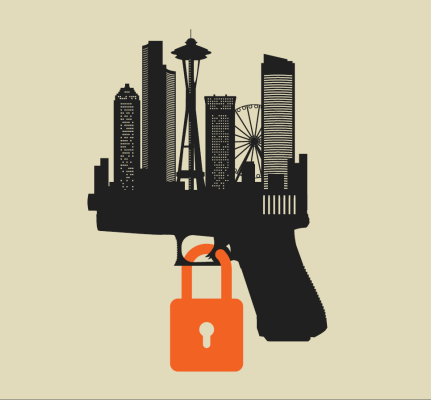 Initial Unit partner agencies include: The King County Prosecuting Attorney’s Office (KCPAO), Seattle City Attorney’s Office (SCAO), Seattle Police Department (SPD) and the King County Sheriff’s Office (KCSO), supporting all 40 jurisdictions in the county, with cases prioritized based on risk, not on jurisdiction. The Unit is comprised of law enforcement personnel assigned from both SPD and KCSO, three dedicated Firearms Prosecutors, a Firearms Advocate (to assist families and victims), a Court Orders Problem-Solver (to help law enforcement quickly resolve any issues on orders so that they can be quickly served and enforced), a Firearms Court Coordinator (whose role is to provide comprehensive information to the judges in civil proceedings and coordinate with law enforcement to ensure swift follow-up on non-compliance), a Paralegal, a KCSO Data Technician and a Program Manager. The positions were strategically developed and scoped to address the most critical system gaps.

To Learn More About Gun Violence in King County and Washington State: