Metro Transit Police Department is responsible for providing "enhanced" policing of Metro's bus system and routes across the county, and ensuring safety during Metro's more than 400,000 daily boardings. This service model from Metro Transit enables the Metro Transit Police to provide an “enhanced” service that is above the standard services provided by local law enforcement agencies across King County.

Metro Transit Police enforce the Metro Transit Code of Conduct along with local and state laws. In their effort to protect both Metro operators and riders, Metro officers patrol the Metro Transit system and its facilities by bus, on bike and by car. Crimes and other activities that occur are tracked geographically, so that officers are able to better organize and prioritize their patrols to meet the needs of the transit system.

Officers also educate operators and other transit employees about how to maintain safe and secure bus and transit facilities. In addition, deputies and detectives work on proactive projects to stop crimes before they start. When crimes do occur, deputies focus on a fast response. And, as buses operate through other police jurisdictions, Metro officers coordinate police work with the other jurisdictions, and assist with follow up casework.

Unique to the Metro Transit Police team is also a Bicycle Emphasis Enforcement (BEES) Team, and a K9 unit whose sensitive nose is trained to sniff out 19,000 different scents related to explosives and firearms. 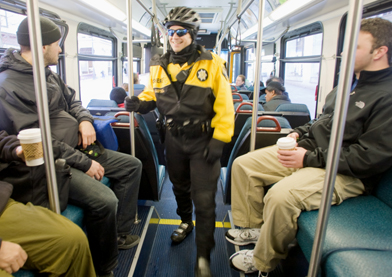 “The Metro Transit Police are essential partners in keeping our transit system safe—Metro’s number-one goal. Our customers and drivers can count on their friendly support and their fast, professional response when needed.”


"Policing a transit system is unlike any other type of police work. A bus becomes a small community as people travel together. Community policing and crime prevention are very important in these 'mobile neighborhoods.'"