Does not operate on weekends or the following holidays:

Does not operate on weekends or the following holidays:

Operates a reduced schedule on the following holidays:

Free parking is available about a block away and uphill from the terminal.

Pier 50 is just north of Colman Dock on the Seattle waterfront, and is within a quarter-mile of dozens of additional transit connections. 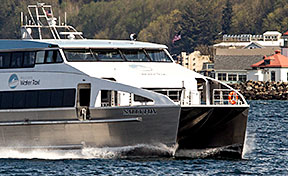 The MV Sally Fox passes Alki Point on the way to the Vashon Terminal.

The first of the King County Water Taxi’s two new vessels, the MV Sally Fox, was dedicated in a ceremony on March 28, 2015, by County Executive Dow Constantine, County Councilmember Joe McDermott, and other luminaries. Some 350 people joined in the celebration, which included live music and free rides on the new boat.

After a public vote, the vessel was named for longtime Vashon resident Sally Willinger Fox, who was a passionate advocate for the preservation of passenger-only ferry service between Vashon Island and downtown Seattle. According to a plaque on the vessel that honors Fox, she “understood that passenger-only service enhances Islanders’ family lives, protects the environment, reduces congestion and contributes to the health, vibrancy, and fun of Vashon and Maury Islands.”

About the MV Sally Fox