The Water Taxi docks in Seacrest Park in West Seattle. The park is easy to reach by bus, neighborhood shuttles, and waterfront pathways for walkers and bicyclists. Visitors to West Seattle will find easy access to waterfront trails, Alki beach, fishing piers, restaurants, and shops along California Avenue. 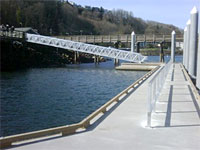 This floating dock was installed at Seacrest Park in early 2010.

*Pier 50 is just north of Colman Dock on the Seattle waterfront, and is within a quarter-mile of dozens of additional transit connections. 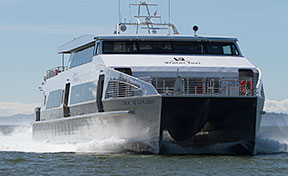 The King County Water Taxi’s newest vessel, the MV Doc Maynard, is one of two new water taxis built with grant money from the Federal Transit Administration. The grant covered 80 percent of the cost of the two vessels.

The new boats can carry 278 passengers, and they have increased bicycle storage capacity, wider doors for faster boarding, and low-emission engines.

After a public vote, the vessel was named for one of Seattle’s early pioneers, David Swinson “Doc” Maynard, who helped shape the Seattle we know today and advocated for naming the city after Chief Seattle.

About the Doc Maynard 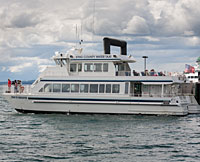 The Spirit of Kingston was built in Bellingham.

The Spirit of Kingston is a foil-assisted catamaran that holds 149 passengers, 16 bicycles, and a crew of three. With a cruising speed of 28 knots, she crosses between West Seattle and downtown Seattle in about 10 minutes.

Inside, the Spirit of Kingston has a combination of theater-style seats, bench seats with tables, and facing seats on two interior decks. She also has one interior accessible restroom, two exterior restrooms on the rear of the first deck, and outdoor seating on the rear of the upper deck.

The Spirit of Kingston has four 750-horsepower propulsion engines that meet Tier 3 pollution standards. The vessel is also equipped with two radar systems, a GPS plotter, a depth sounder, a wired remote steering and propulsion controller with backup, and an AIS transponder. She is inspected annually by the U.S. Coast Guard.

The King County Ferry District acquired the eight-year-old vessel at no capital cost through an agreement with the Federal Transit Administration for the West Seattle/Downtown Seattle route.

At cruising speed, the Spirit of Kingston uses about 100 gallons of fuel per hour.