King County believes cleaning up the Lower Duwamish is the right thing to do.

The County has worked for decades to restore the waterway by investing in habitat restoration, water quality improvement, pollution controls and sediment cleanups. These investments in pollution control and CSO reduction projects have successfully removed decades of contamination from some of the waterway's most contaminated areas.

The Duwamish is cleaner today than it has been in nearly a century. Highlights of King County's efforts to restore the waterway to health include:

1958: Metro was born after a citizen initiative was passed with 58 percent of Seattle’s vote and 67 percent of the suburban area vote. Voters authorized Metro to build and operate regional sewage treatment and water quality facilities to address the worsening pollution of Lake Washington and other local waters.

1965: Sewage and stormwater from along the Green/Duwamish River will be sent to a sewage treatment plant - and as Metro (later to merge with King County) completes its wastewater treatment plant in Renton, effluent is discharged into the Green River.

1969: Metro launches the Industrial Waste Pretreatment Program regulating industries to remove toxicants before discharging their wastewater into the sewer system.

1969: The Diagonal Way Treatment Plant was closed, eliminating its discharge of partially treated wastewater to the Lower Duwamish Waterway.

1972: The federal Clean Water Act becomes law; it is the cornerstone of surface water quality protection in the United States.

1973: The Kent lagoons are closed and wastewater was transferred to the South Treatment Plant in Renton, no longer going into the Green/Duwamish.

1977: The Auburn lagoons were closed and wastewater was transferred to the South Treatment Plant in Renton, no longer going into the Green/Duwamish.

1980: Metro part of first program in the country to target consumer products as a source of toxic chemicals. Metro and area jurisdictions begin planning the Household Hazardous Waste Disposal Program.

1980: Duwamish dissolved oxygen concentrations continue to improve - increasing from 4 mg/L to 7 mg/L since the 1960’s.

1986: Metro began work on a new outfall for the South Treatment Plant in Renton so that treated wastewater discharges could be diverted from the Green River into Elliott Bay.

1987: Metro and the City of Seattle complete the Hanford separation project, reducing combined sewage (a mix of sewage and stormwater) flows to the Diagonal Way storm drain (and into the Duwamish) by two-thirds.

1990: Dissolved oxygen concentrations in the Duwamish had increased to 10 times the levels of the 1960s, greatly improving fish health.

1996 – 1998: King County undertakes an extensive study: “King County Combined Sewer Overflow Water Quality Assessment for the Duwamish River and Elliott Bay,” to have a better understanding of the dynamics of the estuary and the impacts of CSOs relative to other pollutant sources. Study team includes scientists, planners, engineers, and other professionals; a stakeholder committee (composed of representatives from local communities, businesses, environmental organizations, tribal governments, and agencies); and a national peer review panel.

1999: King County’s Regional Wastewater Services Plan is approved – including extensive public involvement and review, the 30-year plan was approved for work to control many county CSOs in Seattle, including five that required control in the Lower Duwamish Waterway. Five of those projects began in 2012.

1999: Norfolk combined sewer overflow sediment remediation project: King County removes 5,190 cubic yards of contaminated sediment near the county’s Norfolk CSO. The project was monitored for a period of five years. The EPA, Ecology, King County and City of Seattle worked together on source control, project planning and design for the project.

2000: Herring's House Park and Intertidal Habitat Restoration Project. This project was completed in 2000, except for monitoring, which continues. The work has included removal of mill structures, a shoreline dock, and contaminated sediments. A 1.8 acre intertidal bay was created, with fringing emergent vegetation in an intertidal zone. Riparian vegetation was also planted to create a riparian buffer.

1999 – 2000: North Wind's Weir Restoration Project: In a project at Cecil B. Moses Park, a one-acre basin is created to provide off-channel habitat for out-migrating salmonids. Emergent and riparian vegetation is planted.

2005: King County's Diagonal/Duwamish dredging removes 66,000 cubic yards of contaminated sediment from the Lower Duwamish. The project was monitored for a period of seven years.

2006: Turning Basin No. 3. Restoration Project. This project is located on the former Kenco Marine Services property. An old building, dock, and grounded barges were removed. Fill material was removed to push back the shoreline. Marsh and riparian vegetation were planted. The project was completed in April 2006, with monitoring for intertidal habitat success conducted through 2015.

2006: The Brandon Street Regulator Station was upgraded to reduce overflows from the combined sewer overflow. Project for full control began in 2013

2007: Baseline ecological and human health risk assessments were finalized for the LDW.

2007: The City of Seattle completed habitat restoration south of the Duwamish substation on the west side of the Upper Turning Basin.

2008: The City of Seattle, The Boeing Company, and King County sign an agreed order with Ecology to conduct a Remedial Investigation and a Feasibility Study for North Boeing Field, which drains to Slip 4.

2009: Construction began by the City of Seattle to clean and replace the Georgetown Steam Plant flume that leads to Slip 4.

2011: The City of Seattle completed the Slip 4 cleanup and habitat restoration.

2013: King County completes an Equity Impact Review   on the cleanup alternatives being considered for the waterway to help inform the County’s position on a preferred cleanup. The review assessed effects of the cleanup will likely bear on selected ‘determinants of equity’ for those who live and work in the LDW adjacent to the cleanup activities and those who depend on or utilize the river for fishing and recreation.

2014: The EPA issued the Final Cleanup Plan (Record of Decision)  in November 2014. The Record of Decision (ROD) will direct cleanup actions and offer plans for source control and long-term monitoring in the Lower Duwamish Waterway.

2014: King County begins the siting process for its Georgetown Wet Weather Treatment Station (formerly known as the "Brandon/Michigan CSO Control Project"), which will keep up to 66 million gallons of untreated stormwater and sewage out of the Lower Duwamish River on rainy days. The treatment station is scheduled to be operational in 2022.

2014: Lower Duwamish Waterway Group begins a Fisher Survey to better understand the habits of community members who fish in the river, specifically what they are eating and how they use their catch. The information will be used in the Superfund Cleanup process to develop tools to protect people eating fish. The study was completed in 2016.

2014: King County adopts its Source Control Implementation Plan. The five-year plan identifies all the actions the County will take in 2014-2018 to implement to control sources from its properties and drainage systems, regulate discharges to the combined sewer, and provide technical assistance to businesses.

2015: The City of Seattle and Port of Seattle completed the Terminal 117 sediment cleanup. The habitat restoration will be completed in 2020. This marks the completion of all the Early Action cleanups by the Lower Duwamish Waterway Group, which reduced the PCB sediment concentrations in the waterway by half – a big step to completing the cleanup.

2016: Baseline sampling and other pre-design studies begins. The Lower Duwamish Work Group study established baseline conditions in water, sediment, and seafood following the early actions; and evaluated the effectiveness of those cleanups, natural recovery of sediments, and source control towards achieving the cleanup goals. The data from these sampling and studies inform the cleanup design.

2019: Lower Duwamish Waterway Group begins cleanup design for the upper third of the waterway. Extensive sampling is conducted to gather the information needed to refine the areas needing action and develop designs for the cleanup. Once design is complete in 2023, the cleanup will begin simultaneous with design for the rest of the cleanup.

2019: King County updates its Source Control Implementation Plan. The next five-year plan identifies all the actions the County will take in 2018-2023 to implement to control sources from its properties and to its drainage systems, regulate discharges to the combined sewer, and provide technical assistance to businesses. 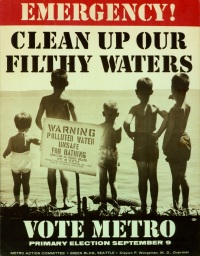 In 1958 the voters created Metro and developed a regional wastewater treatment system based on watersheds as opposed to political boundaries.