East Waterway is part of the Harbor Island Superfund Site and is regulated by the U.S. Environmental Protection Agency (EPA).

Note: This page will be updated once the EPA releases their proposed cleanup plan.

Where is the East Waterway?

The East Waterway is a body of water about a mile southwest of downtown Seattle in King County, Washington. It is part of the greater Duwamish estuary, which extends as far as 10 miles upstream. At the southern end of Harbor Island, the Duwamish River splits into the East and West Waterways. From there the two waterways extend to Elliott Bay at the north end of Harbor Island. The Lower Duwamish Waterway Superfund Site begins immediately upstream of the East Waterway. 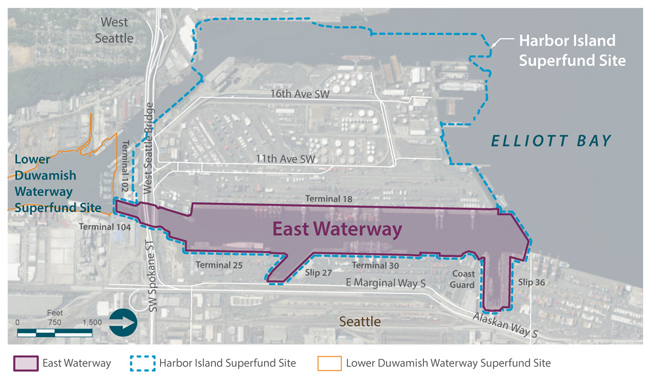 Map of East Waterway within the Harbor Island Superfund Site.

The East Waterway had an industrial beginning: it was created by filling, dredging, and channeling the area during the construction of Harbor Island. The East Waterway runs for one mile along the entire eastern shore of Harbor Island and covers 157 acres. Early industrial and commercial activity in the area included fish processing, shipyards, flour mills, grain elevators, lumber yards, and cold storage. In the early 1900s, wharves built on creosote-treated pilings lined the waterway. After the 1940s, oil terminals, shipyards, rail transfer terminals, transfer stations, metal recycling, cold storage, and lumber yards continued to operate along the shore. Since then, it has continued to be one of the most active commercial and industrial waterways in the Pacific Northwest, serving multiple maritime shipping container terminals. In addition, Tribal members harvest seafood from the waterway, a right guaranteed by treaty with the U.S. government.

This industrial history has left a legacy of contaminated sediment in the East Waterway. High levels of pollutants including polychlorinated biphenyls (PCBs), arsenic, polycyclic aromatic hydrocarbons, tributyltin, and mercury are all found in the bottom of the waterway. Cleanup of the contaminated sediments will be conducted under EPA’s Superfund program. In addition, the Washington State Department of Health has a fish consumption advisory due to PCBs in resident seafood (e.g., sole and crab) for both the East Waterway and the Lower Duwamish Waterway. This advisory warns individuals not to eat resident seafood caught in the waterway. Salmon are the healthiest choice to catch and eat because they spend only a short time in the Duwamish. Learn more about fishing the Duwamish: Fishing for safe seafood to eat - King County

The East Waterway is part of the Harbor Island Superfund Site

The Harbor Island Superfund Site is one of the first Superfund sites in the country. It was listed on the National Priorities List in 1983.

Harbor Island is a human-built, industrial island next to Elliott Bay. Built in the early 1900s, the 420-acre island supports businesses that conduct commercial and industrial activities, including a former lead battery recycler, ocean and rail transport operations, and petroleum fuel farm storage and operation. Previous operations at the site left behind groundwater, sediment, and soil that was contaminated with lead and other pollutants.

The EPA divided the Harbor Island site into six smaller cleanup areas, known as “Operable Units” (OUs). Cleanups have been completed at five of the OUs. The East Waterway OU is the final cleanup.

Community Engagement for the Superfund Process

King County, City of Seattle, and Port of Seattle have formed the East Waterway Group , or EWG. The EWG has worked collaboratively under the direction of the U.S. Environmental Protection Agency since 2006 to:

EPA is using this information as they decide on the best cleanup action.